On the day Labour launched its Safer Communities campaign, newly released figures show that anti-social behaviour has rocketed in the last year in Redcar And Cleveland.

This year alone, across the country, police recorded over 2 million incidents of anti-social behaviour (ASB) – the highest in seven years. Offences range from people using and dealing drugs, fly-tipping, vandalism and threatening behaviour. Analysis of the Crime Survey data lays bare the scale of the problem and reveals over 13.6 million adults have witnessed or experienced anti-social behaviour in the last 12 months.

Councillor Carl Quartermain, Leader of the Labour Group in Redcar And Cleveland said,

“The government has to act on their promises and properly fund and staff the police. We need to see real action to support our communities in Redcar And Cleveland and to bring back confidence. Crime and anti-social behaviour has been noticeably increasing here and across the country for years under this Conservative government. Up to 2016 the Tories intentionally decimated our police numbers by over 21,500 and have subsequently dragged their heels since 2019 with a U-Turn on this reckless decision. To rub salt in the wounds there will be no pay rise for the police service, leaving the Police Federation for England and Wales declaring ‘no confidence’ in the current Home Secretary. This cannot continue. We need a motivated and fully resourced police service.

“Let’s be realistic, the 23% figure for ASB in Redcar And Cleveland reflects what has been reported. We know that many incidents go unreported because residents have little confidence following unsatisfactory responses. Ministers have got to listen to our communities and businesses who deserve to feel safe and protected in our villages and towns. People in this area have had enough of being let down by this wasteful Government who have purposefully allowed anti social behaviour to reign in our neighbourhoods over the past eleven years. They can do this now by adopting Labour’s Safer Communities Campaign which is a real plan to properly protect victims and to boost police officers and PCSOs numbers and to increase CCTV to help crack down on ASB.”

The worrying increase in anti-social behaviour comes off the back of new figures showing a gaping £1.6 billion police funding gap in 2021 compared with 2010.

As Labour launches its Safer Communities campaign it will be demanding the Government do more to tackle this troubling escalation of anti-social behaviour across the country and end violence against women and girls. Labour has pledged:

“Even in the face of these terrible figures, Ministers continue with the wrong priorities, wasting millions on a pointless yacht, when they should listen to Labour and plough that money into taking action against anti-social behaviour.”

· The Telephone Crime Survey for England and Wales (TCSEW) estimates that 29% of adults personally witnessed or experienced anti-social behaviour in their area in the last 12 months.

· By applying that percentage to the latest population estimate for adults in England and Wales, that suggest 13.6m adults experienced ASB in the last year.

Separate figures show that police forces in England and Wales recorded 2,022,274 incidents of ASB in 2020-21, up by more than 600,000 in a year and the first time since 2013-14 that the figures has exceeded 2m. · The analysis also reveals ASB is up across the country, with every territorial police force except the City of London Police recording a rise. 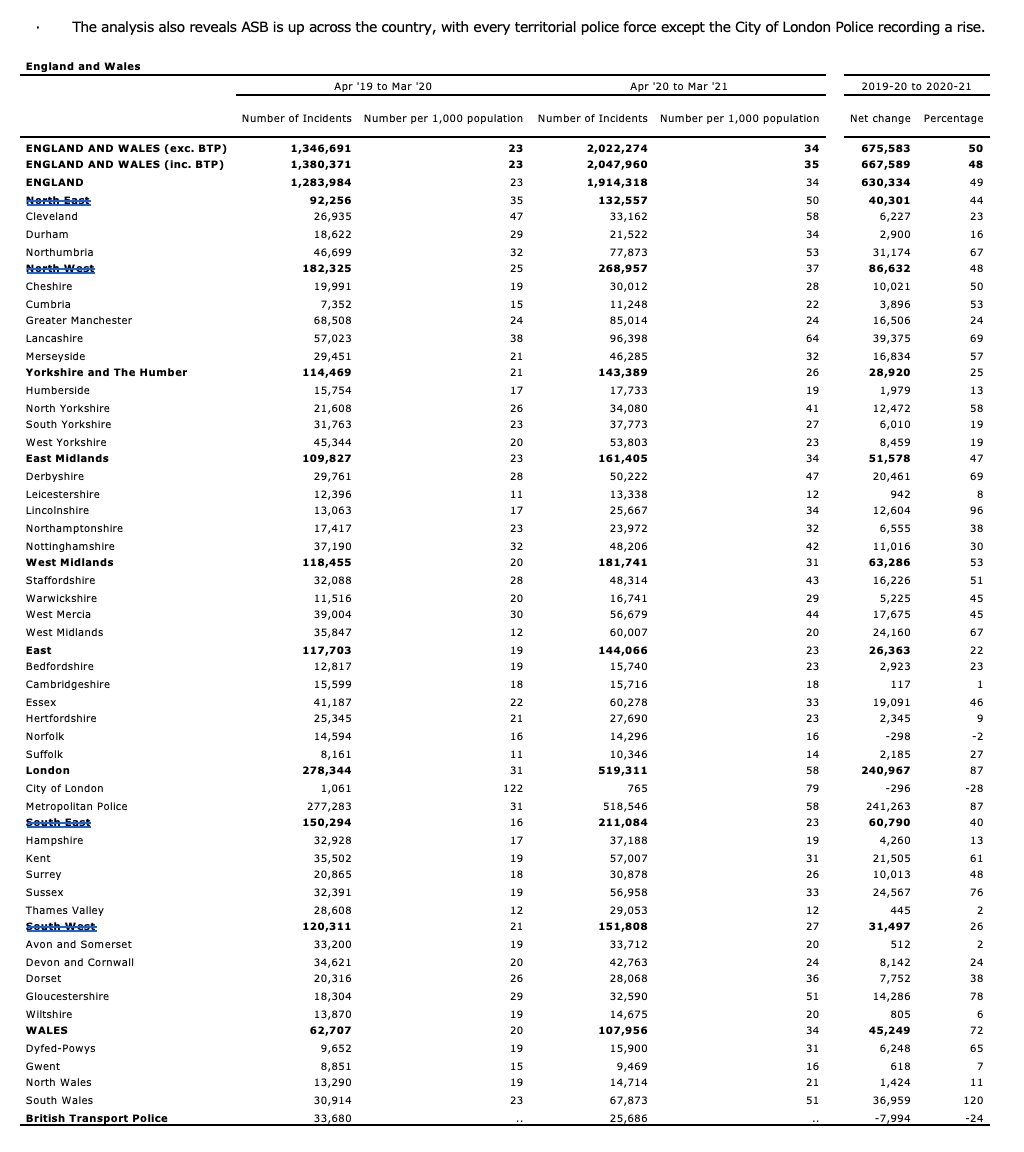